How Can Tailormade XMT Handling Systems Improve Your NPT

A lot of rigs have limited and/or very generic handling systems for XMTs. This is far from optimal and often results in inefficient handling including a higher degree of manual work with several safety issues. Not surprisingly, such activities are related to NPT.

Imagine that you are going to skid a XMT Stack while the rig is in motion. When do you have to stop and when can you continue? To which extent is manual work involved? What are the bottlenecks and how can they be mitigated? Can your equipment operate safely with the roll, pitch and heave experienced, or does your rig require some upgrades to handle the weather conditions?

Every task has a weather limitation, as well as a time span. Consequently, one main contributor to NPT is harsh weather. Without proper XMT handling systems, the operations become more sensitive to weather, creating a high risk for unpredictable stops and long periods of downtime.

In order to optimize the efficiency of the XMT operations, it is crucial to examine the rig`s specific infrastructure, conditions and characteristics. With those factors established, the XMT handling system can be designed accordingly.

This engineering process ensures that you have all the lifting/handling capacities needed, avoiding temporary arrangements. As a result, less/no manual work is required, and the time required for the operation can potentially be reduced with several days.

An ideal and efficient XMT Handling System consist of a (retrofit) flush mounted skidding deck with several bilateral skids, a stack up guiding system and an overhull and underhull guiding system. This enables the rig to have several XMT`s, a Tree Running Tool and required transport and test-skids onboard.

The rig can then stack, test, run and retrieve the XMT Stack or Workover Stack with all lifting operations secured and guided horizontally preventing any hazards for personnel and equipment.

It is furthermore very important to design the system so it can handle all relevant XMT units from different suppliers such as; FMC, Aker, Cameron, Baker Hughes etc. The flush-mounted skidding deck will provide 100% deck space once the XMT campaign is finished. Safe handling and guiding systems for lifting the units from the supply vessel to the rig and vice versa is also important.

Having an optimal and complete XMT Handling System, will save time and reduce risk considerably. The time saved will vary from a few hours to several hours depending on rig layout and equipment. In some cases, days can also be saved since the operations can be performed in rougher weather conditions as opposed to waiting on weather

The Importance of Guiding & Arresting

In order to be able to complete XMT operations in a safe and efficient manner it is important to ensure:

In order to accomplish the above there are some main handling systems that every rig should have:

The rig also need to arrange the Workover Control System (WOCS), Umbilcal Reels and sheaves and utilities for efficient running and control of the XMT Operations.

Today, the XMT stack-ups are considerably higher than they used to be. As such, skidding these stacks into the moonpool can be a dangerous operation, particularly when the rig is in motion induced by waves and wind forces. It is therefore very common for rig operations to be negatively affected or halted, due to weather conditions.


However, this can be avoided by investing in systems that are able to arrest and secure the high stacks, both in a parked position and whilst skidding. 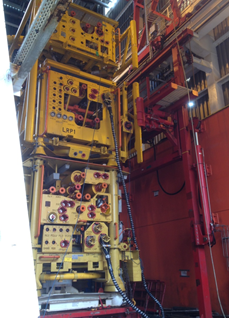 In other words, with robust arrest systems, NPT can be reduced substantially as you are able to operate with considerable rig motion, without putting people at risk.

All rigs have some sort of XMT handling systems enabling moving the XMT from parked position to the well centre and back. However, these basic systems may be inadequately engineered resulting in uncompetitive handling sequences.

With tailor-made handling systems, such challenges can often be considered achievable, resulting in a more efficient and attractive rig.

Such systems represent a modest investment with high returns, but need to be engineered by teams both understanding moonpool operations as well as equipment design.

When a BOP or XMT is lifted off the skid on a floating rig, they tend to begin moving horizontally. In order to maintain control of the XMT motion in a safe manner, an overhull guiding system is required to properly arrest the stack in place. This is also required during stacking and testing prior to skidding the stack to well centre and running it.

However, such guiding systems are not standard on all rigs, it is therefore common for some rigs to have inadequate systems, or do not have such systems installed at all.

Without such systems in place, teams try to arrest the motions by using tugger winches, wires and snatch blocks, often creating hazardous situations to people and equipment. Rig operations have to wait for acceptable weather conditions in order to perform the operation

Considering that this specific operation is normally executed 2-4 times per well, there is thus a adequate and considerable potential for saving time and cost by investing in guiding systems.

In order to optimize the efficiency of the XMT operations, it is crucial to examine the rig`s specific infrastructure, conditions and characteristics. With those factors established, skilled engineers with relevant operational and product competence can design and deliver an efficient and safe XMT handling system., making your rig more attractive in the market for a relatively modest investment. 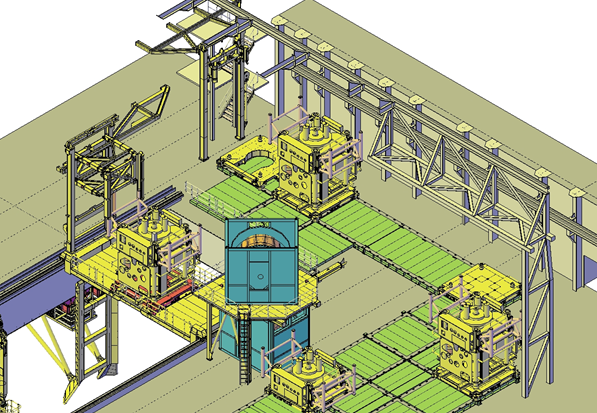 With over 37 years of experience within offshore drilling technology, Øystein offers insights that can help you optimise your rig performance. His expertise is to optimize operational design and being able to see beyond standard solutions, understanding the specific infrastructure, conditions and movements of each individual rig.